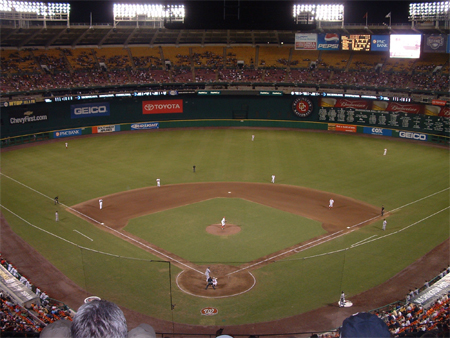 Do you remember a few summers ago when ESPN.com Page 2 toured all the major league ballparks and rated them? Last season I applied the criteria that they used to our own RFK Stadium. Since RFK was “reopened” this past weekend, I thought I would do it again and see how it fared.

1. Access:
Two Metro lines stop a few blocks from the stadium. There are 10,000 parking spaces and I am told driving in and out is not bad at all. Metro does get crowded after the game though, so walk out of the stadium quickly. 4.5

2. Exterior architecture:
Since RFK was the prototype for the multi-purpose stadia of the 60s and 70s, it is not much to look at. However, the sloping roof is unique. The DC Vote sign breaks up the monotony of the design too. When it comes down to it RFK surpasses the late Three Rivers, the Vet, Atlanta-Fulton County, and Riverfront which were the cookie-cutter stadiums that followed RFK. The only circular stadium that had more character was Busch Stadium (II) in St. Louis after renovations in the 1990s.

RFK’s position on the same axis of the Lincoln & WWII Memorials, Washington Monument, and Capitol is worth a point too. 3

3. Interior architecture:
Despite being a multipurpose stadium, RFK is surprisingly cozy. The multipurpose stadia that followed it were significantly larger and thus much more imposing and impersonal. Like so many inexplicably popular throwback jerseys, RFK’s multicolored seating level gives it a certain charm in an era of clean lines and green seats in every park. The white seats in the upper section of leftfield, signifying Frank Howard homers, remind us of the history of D.C. baseball. The green fences and walls are adorned with a the Hall of Stars sign, analog Nats clock and Nats banners keep RFK from duplicating the boring look of Riverfront or Veterans stadiums. Some of the upper deck had green paint added as well, which is more appealing than what was there previously.

The floor has been cleaned up as much as possible too. The corridors are pretty dank though, having more in common with Yankee Stadium than Camden Yards. 3

4. Ticket prices and availability:
You can show up at just about any game and get tickets for the upper deck for as low as $3. That is right, I said $3! Even if those are sold out, you can get in for a mere $7, which is cheaper than a movie ticket. You cannot buy tickets in the lower seating area though, since those have been sold out to season ticketholders. 4

5. Seat comfort:
The seats are over 40 years old and made of wood. In some areas, there is a lot of legroom though. I am probably being too charitable here. 3

6. Quality of hot dogs:
Dominic’s of New York is maker of the hot dogs and they pass my taste test. The regular “super-dog” is $4, which is pretty steep for a simple little dog. Your best bet is to find a grill cart and get the $5.50 grilled dog with hot onions & peppers. At about twice the size of the superdog, it’s practically a meal. 4

7. Quality/selection of concession-stand fare:
The concessions have improved with the additions of more choices beyond the “ballpark dreck” (as described by Ultimate Sports Roadtrip) of chicken tenders, hot dogs, etc. The new food court with Hard Times Cafe, Cluck U(niversity) Chicken, among others, improves the options a lot. There is now soft ice-milk (not cream!) as well as the infamous Dippin’ Dots. There is also Red, Hot and Blue in section 323.

The lines for the regular stands can be dreadfully long, due to the utter incompetence of the staff. I wonder if these imbeciles can even dress themselves. 2.5

8. Signature concession item:
There really is not one and I don’t expect there to be as long as the Nats play at RFK. Some halfsmokes would be good though. 2

9. Beer:
All of the standards are available. Draft macrobrews are $5.50, which is comparable to any number of gimmick restaurants. Plastic bottles cost $6.50, which is kind of surprising, I would have expected the prepackaged beer to cost less. There is are now some imported stands in the main concourse. The Foggy Bottom Ale stand is missed. 3.5

11. Scoreboard:
The main one is located off the upper overhang in right-centerfield. It is nothing special, and not very visible from much of the park. The pitch speedboards is inconsistent at best. 2

12. Quality of public address system:
In a good portion of the upper deck, you have no chance of understanding what is being said. Given the quality of the p.a. announcer, this may not be such a bad thing. 2

13. Fun stuff to do besides the game:
There is now a kid zone with video games, speed pitch and more. There is also the improved presidents race with people in costumes racing each other — at last we have an answer to Milwaukee’s sausages and Pittsburgh’s pierogis. 3.5

14. Price/selection of baseball souvenirs:
It’s okay. The team store has moved into the stadium proper after having been in double-wide trailers. It’s on par with the MCI Center in that regard. There are also stands throughout selling stuff. 3

15. Friendliness/helpfulness of usher stuff:
There are not too many of them it seems. I have not had some of the problems others have mentioned though. 3

16. Trading-up factor:
This is one of RFK’s strengths, you can get in for as little as $3 and find yourself sitting in much better seats by the third inning. 5

18. Seventh-inning stretch:
The Nat Pack leads in the singing, which is pretty effective at getting the fans to sing, just tone down their awful singing. One thing I would like to see is Heart from Damn Yankees follow Take Me Out to the Ballgame. 3

19. Pre-and-postgame bar-and-restaurant scene:
There is none whatsoever, but that will change if/when the new park is built. There is some tailgating though. 2

20. Wild card:
The revitalized RFK is lipstick on a pig, but a step in the right direction. It is a unique throwback to the multipurpose stadia of the 1960s. I gave it 10 extra points last year just because we finally had a team again and I cannot take points away since improvements have been made. 10

One Reply to “Grading RFK (again)”