BALLPARKS I HAVE SORT OF BEEN TO

It began innocently enough back in ’99. I was on my last spring break, visiting friends in Colorado. One particular afternoon, we strolled over to Coors Field, home of the Rockies, and my friend took a photo of me standing in front of it. 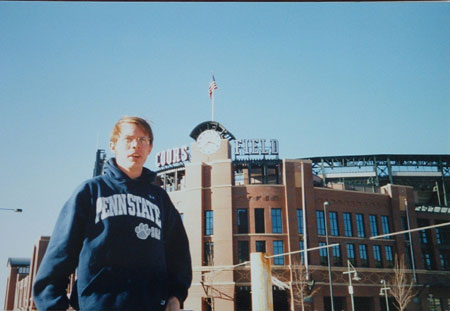 As you can see, there is nothing extraordinary about the photo. If anything, it is not terribly flattering. I really did not think anything of it at the time and put it in album with all of the others from the trip.

Three years later, my girlfriend Erica and I, were out near Pittsburgh for a wedding. The day after we had checked out and had a half hour to kill before the next occasion of that weekend. Since we did not have time to take in much of the Steel City, we wound up parking at the sports complex on the city’s North Side. Without thinking of the Coors Field photo, I got a photo taken of me in front of PNC Park, the home of the Pirates. 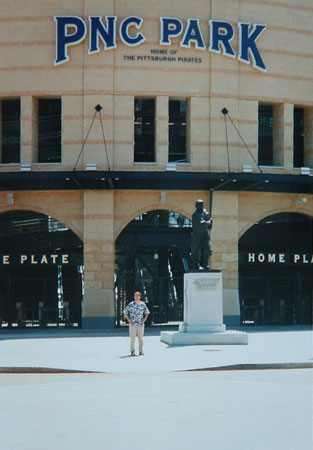 Again, no big deal and it too was added to the photo album. Fast foward to 2004. I found out that we were going to a wedding in Vermont and it was decided that we would take the whole week off and stay up North. We added Montreal and Boston to the agenda and I looked to see if either the Expos or Red Sox would be playing that week. It would turn out that the schedule was not in our favor in either city on the days we would be there, so I joked that I would have to get another photo in front of a ballpark that I had never been inside. With that epiphany I decided I would make it my quest to get photos in front of as many ballparks I had never seen a game at as possible. With that decided, we made a slight detour on the way back from the Jersey Shore through Philadelphia. In addition to getting Philly cheese steaks at Jim’s, we made a very quick stop in front of the Phillies new yard, Citizens Bank Park.

On April 4, 2005, I crossed Citizens Bank Park off the list when I attended Opening Day. It was Phillies vs. Nationals in their first game ever. You can read about the experience here and view the 33 photo gallery of my trip here (pops up). 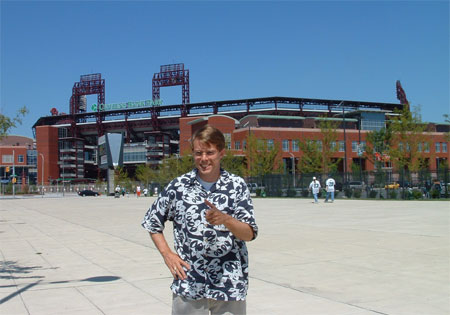 A month or two later, we were at it again. This time, we were in Montreal, home of the Expos for at least the rest of the month. This would be most satisfying. 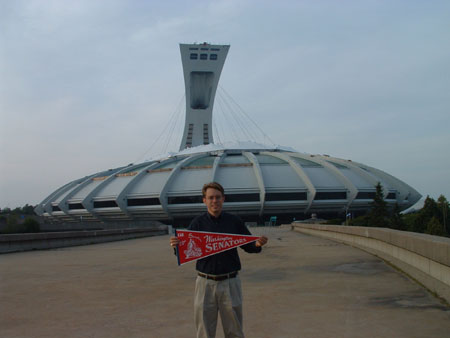 I displayed a Senators pennant because for five years, myself and other Washingtonians have coveted the Expos. It was apparent that Nos Amours did not have a future in Quebec and the most logical place to relocate them was D.C. I could not resist the urge to do this and thankfully, 23 days later, Major League Baseball announced the Expos would be coming to the Nation’s Capital (pending funding, etc.). I did not do this out of spite, but out of hope that my city would get a team of it’s own. I have nothing but good things to say about Montreal, it is a wonderful city and Olympic Stadium is a facinating structure. The tower is accessible offers stunning views of the city and is accessible via a furnicular and is worth doing if you find yourself up that way.

Lastly, (for now) I have Boston’s Fenway Park, home of the hated Red Sox (I am the son of a former Yankees employee). We were in Beantown just four days after Montreal and jumped off the T for a quick walk over. 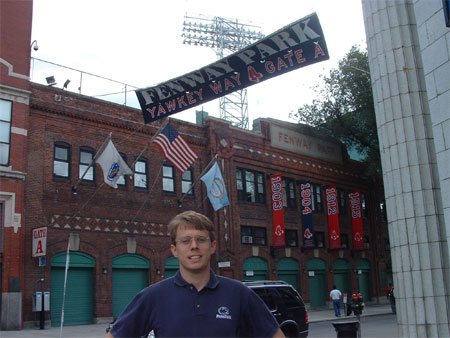 I added another ballyard in late 2004. 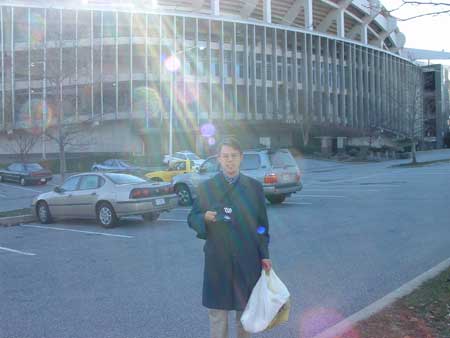 Here I am standing in front of Robert F. Kennedy Memorial Stadium in Washington D.C. I have never seen a regular season MLB game there.

After years of waiting in vain, I finally got to see real baseball in the Nation’s Capital on April 20, 2005. The Nats beat the Braves on a Wednesday night. It was joyous. Here is my blog account of that evening.

I have seen exhibition baseball there on a couple of occasions. Fortunately, starting this year, I should be able to remove this from the list as the Montreal Expos have relocated to D.C. and been renamed the Washington Nationals for the 2005 season.

One Reply to “BALLPARKS I HAVE SORT OF BEEN TO”