BLAKESLEE, Pa. — While the drive up I-81 was an interesting trip up memory lane, Friday’s main event was a day of skiing in the Pocono Mountains. I first became acquainted with the region during my first two years of college at Penn State Hazleton. One of campus’ biggest pluses was being less than 40 miles away from most Pocono ski resorts, and I took advantage of that by taking skiing classes both winters I was there. It was a pretty good way to fulfill my ESACT requirement. Big Boulder Ski Resort was the site of the 7-week class, so I got to know it quite well.

Since we were driving from York and wanted to maximize our time on the slopes, Wiley and I choose Big Boulder over Camelback, which was farther away. We were quite pleased to see a little bit of natural snow on the drive up, starting near Tower City. By the time we passed Hazleton, snow covered the entire ground. This held true along I-80, even though the elevation is significantly lower than I-81.

Before we arrived at the resort, we stopped at County Line Ski Rentals on PA 903. It was there that we learned Big Boulder did not open until 4 p.m. on weekdays, d’oh! Thankfully, Jack Frost Mountain, Big Boulder’s brother, was open during the day and not too far away. I was not too disappointed in this development because I got to try out a new resort. Also, I had seen that Big Boulder had become a more snowboard-friendly resort at the cost of some excellent runs, like Merry Widow. 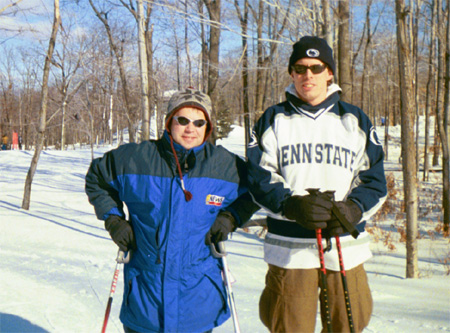 I’m tall
After a circuitous journey from Big Boulder to Jack Frost (note, the signing is poor on PA 115, make sure you turn onto PA 940 WEST) we arrived. Jack Frost is the first resort that I have been to that has the lodge/parking at the top of the mountain. That turned out to be rather convenient, since after buying lift tickets, all we had to do was put our skis on and go downhill. We took a run or two down ●Snowflake and made our way Over to the intermediate slopes. First we skied ■Lehigh, followed by ■Exhibition and then ■Dematte’s Demise. I enjoyed all three runs, but probably preferred Dematte’s Demise the most. Wiley, a more experienced skier, was ready for something more demanding, so we took ♦The Challenge. After The Challenge, we attacked attempted ♦Thunderbolt, an ungroomed run with moguls. If I recall correctly, Wiley took it first and had a little trouble. I got farther down the mountain before doing a face plant coming off a mogul. Wiley was quite amused and remarked that it looked like a skier exploded. Having lost the following: ski hat, both poles, a ski, and my sunglasses, he may have been on to something. I think I also bounced at least one ski on my kneecap. Eventually, I got myself back together again and finished the run without further incident. 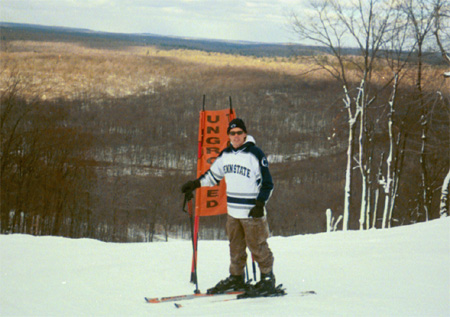 Before I knew better

Having been reminded of our limitations, we moved back over to Dematte’s Demise and attacked it with gusto. Those ♦runs make the ■’s seem quite easy. 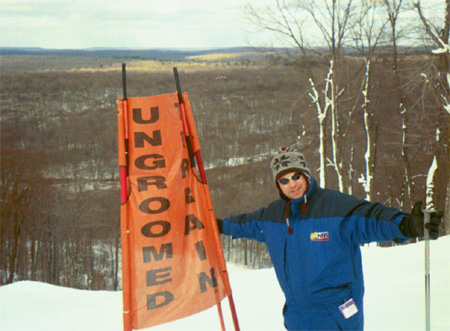 We enjoyed several more trips down the mountain before heading into the lodge to warm up and get a snack. Inside, we found the exact same fare we had seen at every ski slope we had been to in our lives. Since it was a school day, the lines were non-existent and tables were plentiful. It was a nice change of pace from what we were used to on the weekends. The prices were also not particularly unreasonable; my order of fries and hot chocolate came in at $5.

After warming up inside, we went back outside to the best conditions of the day. The partly cloudy skies of the early afternoon had switched to mostly sunny with a temperature of about 25° which was just about ideal with the sun out — cold enough to keep the snow from melting, but sunny enough to keep us from getting really cold. The wind was occasionally gusting, particularly on ■Sno-Chute, a run that feeds The Challenge. I was quite comfortable wearing five layers on my upper body (and looking sharp in my Penn State hockey sweater) and three layers on my legs (including sweat pants and wool Army pants on the top). The snow was packed powder for the most part with little ice and not too much grooming. I don’t think you could hope for much better conditions on man-made snow.

After a couple of quick ■ rides, we attempted Thunderbolt again. Having learned from our previous errors, we stayed to the left side of the slope. Wiley (who it must be said has a much lower center of gravity) was able to make it down unscathed, while I had some unspectacular falls on my trips down. I did make it down without incident once. 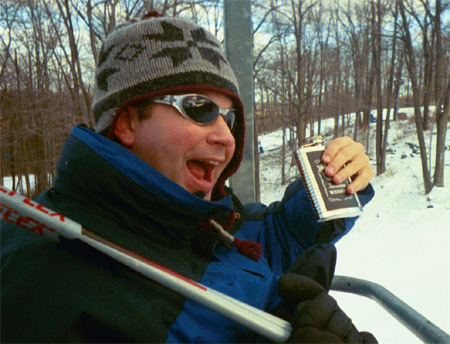 Having had our fill of moguls, we went over to the far side of the mountain and tried out ♦’s over there. ♦Telstar, ♦Lightning and ♦Solitude all fed ♦Floyd’s Folly to the bottom. I preferred Telstar, a longer run that overlooked the Lehigh River. It had the best view from the resort (is it just me or is the scenery in the Poconos generally underwhelming?) and a good descent before leveling off a little too much. It is an impressive ride nonetheless. We enjoyed it several times, but as the afternoon grew late, we headed back to the center of the mountain, riding down Sno-Chute (the windiest part of the mountain) before taking a final ride down The Challenge and Dematte’s Demise. We rode the lift back to the top, took our skis off and walked to Wiley’s Jeep. It was time to head over to Big Boulder and take advantage for the transferable lift tickets for some more skiing. 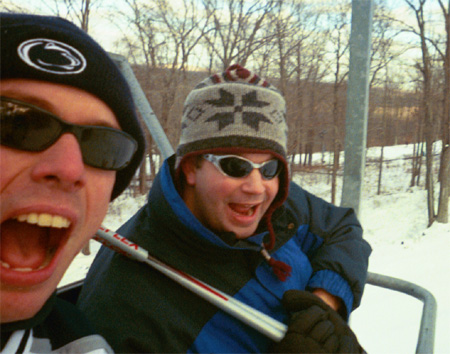 Hi Mom!
Overall, I was pleasantly surprised with Jack Frost. Though it was small and apparently has less of a snow base than other Pocono resorts, I was quite pleased with what it had to offer. For an intermediate level skier like me (with no aspirations of being an expert) it was a solid ski area. I would not recommend it above Camelback, which is my favorite resort, but it is a good choice if Camelback is not an option. Using the ski conditions scale, I give it a ■.