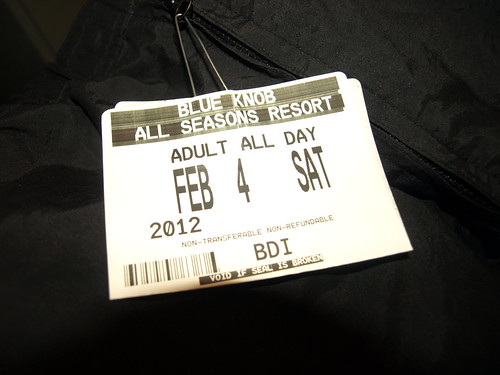 CLAYSBURG, Pa. — This winter of discontent in the mid-Atlantic made finding the time and and place to ski or snowboard a tough one. My friend Ryan and I determined that Saturday, February 4 would fit our schedules the best and I spent too much time and energy worrying about the forecast for that day. I had hoped to go out to Western Pennsylvania to ski for the first time, but if conditions were going to be better in the Poconos, we would go there. By Groundhog Day, it appeared that a western Pennsylvania location would be adequate and I was initially looking at Seven Springs. However, Ryan thought that would be too far and suggested Whitetail. We met halfway and choose Blue Knob which I had not been to yet either.

Ryan took up snowboarding because he concluded that skiing south of Hunter Mountain in New York State was not sufficiently challenging. On the other hand, only get out once a year, so I have gotten enough experience to find the mid-Atlantic boring. Most of my skiing has been in the Poconos, but I have wondered if I should have been going west. Seeing that Blue Knob was the highest skiable mountain in Pennsylvania made be very eager to see what it had to offer.

Leaving around 7:30 a.m., we headed west in Ryan’s jeep with my Ski Chalet rental skis and his snowboard. The drive up was not terrible inspiring for a skier. We didn’t see any signs of snow until we started seeing little piles leftover on the access road in Blue Knob State Park. 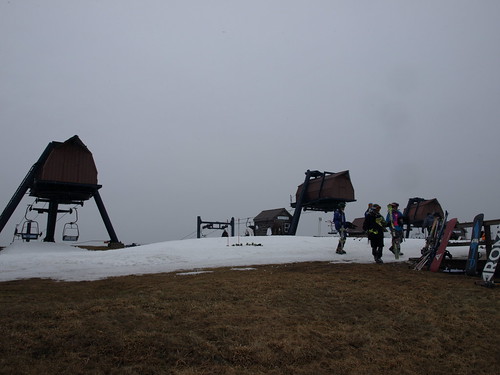 Not long after we arrived, flurries started falling. We got our gear on, bought our lift tickets and left the Summit Lodge which is at the top of the mountain. Being able to get right on the slopes has its advantages — the only other time I went somewhere with an “inverted lodge” was five years ago at Jack Frost in the Poconos. Perhaps we would have been well-served to really study the map — ●, we found ourselves on ● Upper Mambo Alley. It was a bit icy and treacherous. That only increased as we descended onto ♦ Lower 66 instead of ● Lower Mambo Alley. The trail was fairly narrow with an (inactive) chair lift and its supports going through the middle of it. Trial by fire for us, but we made it down. Having gotten back to the top, we worked our way over to the ■s and gave Jack Rabbit a try. Snow starting falling harder, but the icy on Jack Rabbit made it difficult in parts. I took a stumble on one of that flatter parts when I caught an edge. On the steeper parts, I could just blow through that sort of thing. The run was pretty good though, although the extension ● Run Off was too flat to take all the way down to the bottom of the mountain. We took Jack Rabbit a few more times before heading to the lodge. 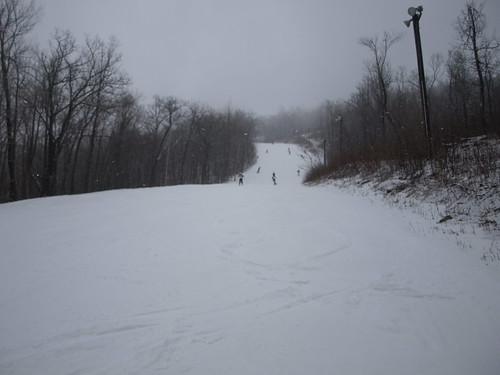 As we enjoyed a refreshment, the snow really picked up, covering the ground. The conditions after we got back out were much improved. Just a little bit of fresh snow goes a long way and we really got a great feel for the run. We even broke out the camera to start taking photos of our exploits, plus a creepy little primitive cabin off to the side. Feeling pretty good about ourselves, we tried the nearing ■ Expressway run, but agreed that it was not as good as Jack Rabbit. Comfortable that we had conquered Jack Rabbit, we headed over to the ♦s again with the intention of heading down the Stembogan Bowl. Somewhere in there, we found ourselves on Lower 66 again and did better, but agreed we needed to be careful to avoid it. We finally got headed in the right direction and went across the East Wall Traverse, which is so flat it is hard to keep momentum before reaching the bowl. The lack of snow meant only about half the bowl was really usable, but that was not problem given how few people were out. The snow continued to fall and after going through the bowl, so did we. I got turned around coming out into the narrower trail and hat to bail. Not a bad fall and my helmet kept me from getting to snowy. The run was alternately icy and bumpy, but overall a fun ride. We took it several times and I was getting down cleanly every other ride. Ryan continued to be “humbled” and noted that wearing a helmet was vindicated. After several runs, we headed back to the lodge another time to warm up by the natural fire place and enjoy a refreshment.

Following the second intermission, we skied a little more in the middle of the mountain. We skied down a run previously reserved for that day’s NASTAR trials, ■ Upper High Hopes. However, we were still disappointed to see that ■ Deer Run was not open. It looked like a great wide run, but sadly we couldn’t go on it. A trip down

A couple more runs on Jack Rabbit awaited and then over to Stembogan for one more run. Jack Rabbit could be mastered, but Stembogan proved elusive, a welcome challenge though. After one last run through the bowl, Ryan retired to the fireplace in the lodge while I took 3 more runs down Jack Rabbit, all-out. I probably got down in under 4 exciting minutes. It was dark out, the snow had stopped falling and I was ready for the lodge and then long trip home.

Blue Knob would be an excellent mountain in ideal conditions, but I don’t know how often that happens. I mentioned on twitter that it was icy the other day and @KyleFisherMBA replied it was “always icy.” That could be said for a lot of Mid-Atlantic ski areas and having skied at Big Boulder all those years, I was well-prepared.

I have to take points off for the lack of posted maps and signs though. It was easy to get headed in the wrong direction. Some more consistent signing would improve the experience. Frankly, I don’t know why ski resorts haven’t started putting up LED maps with current conditions — it doesn’t seem like something that would be too difficult to develop or cost too much.

Also, there was some trail inflation going on. A number of short stretches between trails were given their own name to beef up the total. I would have to say the “34 trails” should be more like 25. Only about 10 real trails were open that day.

The greens could get really, really flat, particularly “long green one” that helps the mountain pads the 1,000+ feet of vertical claim.

Now, onto the positives — the mountain was not crowded at all. Granted, this terrible winter for snow lovers contributed, but being so far removed from major population centers is also a factor. We had now more than a 2 minute wait for a chair lift and that was the exception rather than the rule. The trails were nice and open (especially Lower 66) throughout the day which was great.

The overall ambiance was also quite good, most resorts seem to insist on blasting some classic rock station from every lift, but that only happened from one lift and only in the afternoon. We really felt as though we were out in the mountains away from it all.

The lodge was cozy and didn’t force the Alpine theme that other places do. Here is what I had to say about The Summit Lodge.

I anticipate that I will return to Blue Knob again — it is closer than the Poconos and in several ways, better. On a day with better conditions and more trails open, it has a lot to offer.

DIRECTIONS
Blue Knob is about 2½ hours from the Capital Beltway. Take I-270 north to I-70 west. Stay on I-70 west into Pennsylvania. At Breezewood, follow I-70 west onto the Pennsylvania Turnpike (I-76) and head west towards Pittsburgh. Take exit 146 BEDFORD – I-99/US 220. After the toll plaza (it was $2.05 for us) follow the signs for I-99/US 220 north. Take a left at the traffic light after the toll plaza and then take a left at the next traffic light to join I-99. Take EXIT 10 – Blue Knob State Park and follow the signs to the resort. Note, going back, the signs are not as prominently posted as heading in.