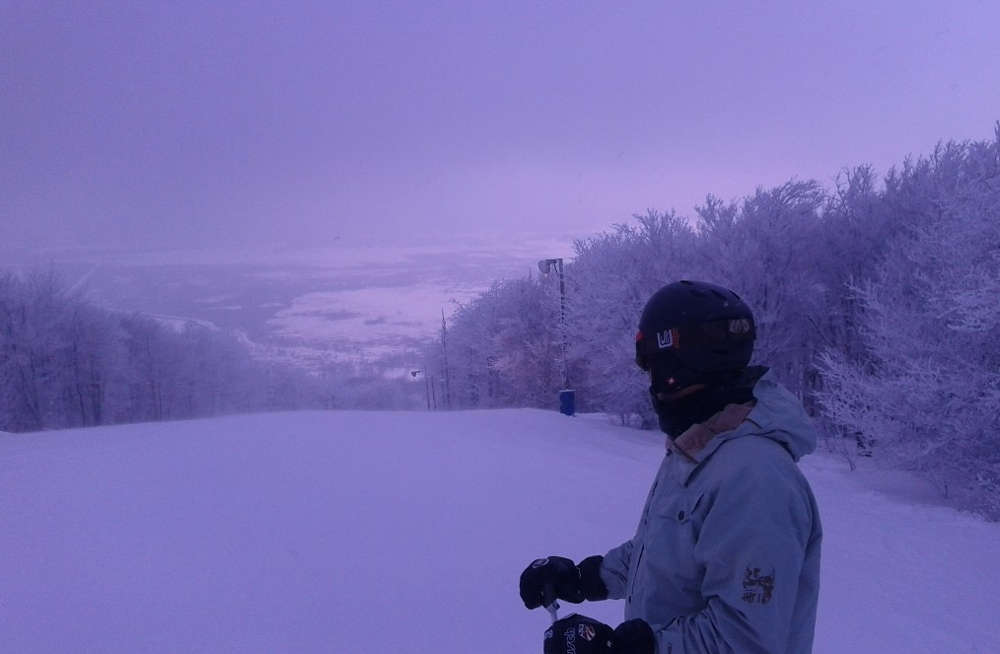 DAVIS, W. Va. — My annual ski trip with my friend Ryan took us to Timberline this year. While we had originally planned on going to Hunter Mtn. in New York State, a number of factors prompted us to choose a place close to home. The promising snowfall predictions for West Virginia, 4,000+ feet of elevation and extended US 48 (Corridor H) made us choose Timberline. It was my first time skiing in West Virginia.

We arrived a after 9 a.m., but didn’t get on the sloops until after 10 a.m. I had to rent skis ($31) and polls having been unable to get some in Northern Virginia. Doing that took about half-an-hour. I guess the nicest way to describe the skis I rented were “pseudo-parabolic.” While they weren’t specifically straight skis, they appeared to be from the dawn of the shaped ski era.

We each purchased the all-day lift ticket ($60) – that line wasn’t too bad.

Snow fell throughout the day, but not very hard. This and the fog (is it still fog from 3,000 to 4,000 feet?) meant the 1,000 feet of vertical was rarely visible from the top or bottom. Apparently, the mountain and surroundings are quite scenic when you can see it.

For our first run of the day, we started on the 2 mile long Salamander● after riding up the Orange Lift (a triple, fed from two sides) . I was intrigued by a run that long, at least I was until I heard the warning that it was pretty flat in parts. Despite picking up as much speed as possible, it leveled off to the point that we had to push and/or skate to keep going. That’s too much work.

We moved on to Upper Dew Drop■ which was much more to our liking. The hill was as steep as some black diamonds at other ski areas. Snow conditions varied a bit as it was icy in parts (mostly in the center of the hill) and snow had piled up in other spots. Picking up speed was no issue and it was in fact advisable to commit to going down fast rather than fight some of the abrupt changes. As Upper Dew Drop fed into Lower Almost Heaven■, the run smoothed out and the ice was gone. We took this run a few times, but the long lines for the Orange Lift discouraged us from staying on that side of the mountain.

After a break, we made it over to the Black Lift, the other triple that reached the top of the mountain. Having entry from only one side and serving mostly black diamonds, the Black Lift was much quicker. It suffered from the same problem of the other lift though — frequent stops due to passenger problems.

We moved on to our first expert trail of the day, White Lightning♦. This was a wonderful run for us. I can’t remember any significant ice, just packed powder and occasionally some piles, but nothing real discouraging. There were few others skiers too, so we had plenty of room and what were probably the best conditions on the mountain. Ryan preferred skiing down the left side, while I liked the right. There was just enough variation in the snow to pull off jump turns when inclined, but not necessary. The run was fast, but slowing down didn’t take as much work here as it did on Upper Dew Drop — the better snow on White Lightning made it easier to ski, despite the steeper slope. I took one tumble – not a bad one near the left side of the mountain.

White Lightning, while really fun, was tiring because of how long it was — a good problem to have. We took another quick break in the lodge and let give our legs a rest. My quadriceps felt like they were on fire and the end of each run (I can only imagine how bad it would be if I didn’t do wall-sits daily) and I was getting winded. I don’t know if I’m just that out of shape or if the air is a little thinner that high up.

After going up the Black Lift again, we decided to try something a little different. We had hoped to get on Twister■ which is apparently an outstanding run. However, it never opened on Saturday, despite being groomed in the morning. Our disappointment with this was shared by other skiers.

A snowboarder — let’s call him “Moonshine” we rode up the Black Lift with suggested we look into a glades trail between Off the Wall♦ and The Drop♦. We figured we’d see we could find it and check it out instead of heading back to White Lightning. We did not find what Moonshine was describing, something we were prepared for given the beverage he professed to have enjoyed throughout the day. We figured we’d give The Drop a shot anyway, just to break up the day. We had heard there were moguls, but there wasn’t moguls so much as there were huge humps. Not surprisingly, there were not many other skiers on The Drop, which was good at least in my case, because I was all over the place. Ryan handled it well, but I fell a few hundred feet down. I got right up, but fell again within 150 feet. The rest of the way down wasn’t bad. We agreed that earlier in the day we would have both performed better, but I have a feeling I would have fallen either way. Going once was worth doing.

After a few more runs on White Lightning, we moved back other to Upper Dew Drop, thinking our tired legs could use a break from the intensity of black diamonds. It wasn’t a great decision, because Upper Dew Drop was even icier. Nonetheless, we both made it down. I was up for another run, but Ryan was finished. The Black Lift had just closed, so rather than deal with the Orange Lift line, I called it a day too. If we did not leave everything on the mountain, we save much for ourselves. I returned my skis and poles and then we went to the car, had a little tailgate before the long ride home.

I don’t think anybody ever has high expectations for mid-Atlantic ski lodges, but the Timberhaus Cafeteria and Timbers Pub left a lot to be desired. The pub bar had only one bartender and he was ill-equipped for the task. While I was sympathetic to his plight, his complete lack of urgency or sensible workflow made us give up after nearly 20 minutes waiting to be served. An efficient bartender could probably make $30 an hour in tips in that environment. We elected to get a couple beers from the car and bring them inside instead. Ineffective staffing left money on the table.

The cafeteria offerings were nothing special, even by ski resort standards. It looks like the ran out of hot dogs because all they had on the rollers were pretty uncooked looking. The burgers looked standard for cafeteria fare. The pulled pork was mostly sauce and the fries were undercooked — that set me back $6.36 which isn’t a bad price. The salad bar looked decent. When we stopped in, the lines weren’t there which was a plus. My friend had the Salisbury steak and mac n’ cheese which he didn’t recommend. Later on he had the chili which was considerably better than other stuff. Overall, the cafeteria was serviceable — when you are cold and tired, anything will do, but it wouldn’t take much to make it a little better. We didn’t try the pub food, figuring it would take too long.

Lastly, Timberline is a Pepsi resort which is laudable.

Getting to Timberline from the Washington D.C. area has never been easier, but it isn’t that easy in bad weather.

After Wardenville, US 48 widens to a four-lane, divided highway for about 43 miles. Part of Corridor H, this Robert Byrd pork barrel project makes the trip much safer and quicker. Had this road not been constructed, we probably wouldn’t have chosen Timberline.

US 48 ends and all traffic is directed left along an access road to WV 93. Take WV 93 west to WV 42 north. WV 93 west is multiplexed with WV 42 north. Continue on WV 93 west after the split, continuing to WV 32. Turn left on WV 32 south and follow it Timberline Resort, a left turn after the town of Davis.

NOTA BENE: Conditions on West Virginia surface roads were snowy, slushy and icy. After getting off WV 42, we switched to four-wheel drive. That helped, but there was still a little slipping. I discourage driving to Timberline without four-wheel drive, the roads are treated with the expectation that you have 4WD, probably because most of the local population does…print out directions and/or bring a map, not a lot of cell towers out that way…there are not a bunch of signs pointing “TO US 48” like you would see in some states…US 48 should be extended to Davis by winter 2015 which will make the trip much easier from the east.

WHAT DOES TIMBERLINE WANT TO BE?

My first experience with Timberline was mixed. I really enjoyed the skiing and the conditions were pretty good. The high elevation for the Mid-Atlantic is an advantage that Timberline and other West Virginia resorts have in their favor. However, the operational aspects of Timberline left something to be desired. This was shared by other skiers and snowboarders we talked to during our visit. There are two lifts to the top and neither is a high-speed or quad which has become the industry standard. The closure of the Twister run was disappointing, especially after they suggested it would probably be open on their Facebook page. Some of the black diamond runs in the middle of the mountain were also closed. To me, that indicates they need more snowmaking equipment. Perhaps in the past this wasn’t an issue, but a series of dry winters of late should have their attention. The shortcomings of the lodge can be overlooked, but it reflects some indifference to the little things. Given a choice of decent concessions or good skiing, I’ll take the latter, but there is no need for them to be mutually exclusive.

The extension of US 48 to Timberline’s doorstep present the resort with a big opportunity to become a premier ski destination in the east. Once that project is complete, getting to Timberline should be a significantly shorter trip and less treacherous drive. I see great potential there to be a great ski resort. I don’t know the economics the resort faces, but as a skier, I’d love to see them invest in more snowmaking so that they could have more of the mountain open. I feel like Timberline is falling short of its potential. I really want to love Timberline, but the long drive and operations discourage me from doing it again anytime soon. I’ll reconsider when US 48 is extended, especially if they improve snowmaking or get a high-speed quad lift, but until then I’ll go elsewhere.