No, I don’t blog much about the Washington Nationals anymore. I will let you figure out why.

When I last checked in on the MASN dispute, I noted that “I am uncharacteristically happy about this news, I’m so used to it being bad for the Nats. However, it could still blow up because Selig’s track record is coddling Angelos and to a lesser extent the Orioles.”

According to the most recent report from The Post the Orioles owe Nationals $55 million-$60 million in fees from MASN, MLB panel ruled. The Nats “big victory” over the forces of evil was about half of what they had sought out, so the of course Peter Angelos and the Baltimore Orioles are still refusing to pay up, hence the dispute. In the end this whole saga will probably end with a whimper and not a bang. The hopes of the Nats being released from the corrupt bargain of outgoing MLB commissioner Bud Selig’s coddling of his friend Angelos seems to be a false one, a figurative towering fly ball caught just before the warning track.

By the way, since the Nats and Orioles are entitled to the same amount of money, Angelos wants to keep it low so he can pocket more for himself. He’s even hurting the Orioles with this bargain. Also, the MASN camp is leaking more stuff to DC media. The Nats tend to keep tight-lipped which is letting others set the agenda.

Over at The Fingerman, Eric Fingerhut wonders why The Post, the most serious outlet left (cough, The Wash. Times, CSN) hasn’t dedicated more resources to this issue. I wonder too, particularly in light of some topics that are covered ad nausem. Not enough interest? Fear of offending Baltimore fan? Lack of interest in Nats fans? Are they Orioles fans themselves? It’s no secret that several people in the DC sports MSM are Baltimore fanboys. It isn’t even necessarily that they are covering for their favorite baseball team, just that they don’t recognize the problems that were foisted upon Nats fans by the cowardice and villainy of Angelos and the Orioles with Bud Selig’s support.

The biggest winner of course in all of this is probably Ted Leonsis whose Capitals and Wizards won’t be on CSN Mid-Atlantic forever. Without his teams, there is little point to having CSN Mid-Atlantic, so that channel’s willingness to make a sweet offer is high. MASN may also want to get Leonsis on board too as it could crush CSN Mid-Atlantic and monopolize all . For all of Leonsis talk of Monumental Network, getting a favorable deal with an existing RSN may be his ultimate goal.

Elsewhere in the world of Nats baseball, Jayson Werth was driving way too fast and is a danger to himself and others. We know this because natsenquirer.com scooped everybody else on it. It seems like the next story the MSM breaks on the Nats will be the first.

Matt Williams hasn’t upset me lately with a acute bad decision, but batting Bryce Harper sixth remains to be baffling. Speaking of Harper, good job by DC Sports Bog pointing out that the Braves reaction to walking through a letter in the dirt is…hypocritical. Oh and because it was awesome and I don’t tire of it, here’s Harper’s walkoff last week:

Michael Taylor’s debut was what’s wonderful about baseball. Maybe the Nats will be okay when Werth is suspended for few games next year for reckless driving.

Theory on Stephen Strasburg: he felt he was getting squeezed on the strikezone by the umps, so he starting throwing his fastball over the plate more. Decreased velocity made it more hittable. 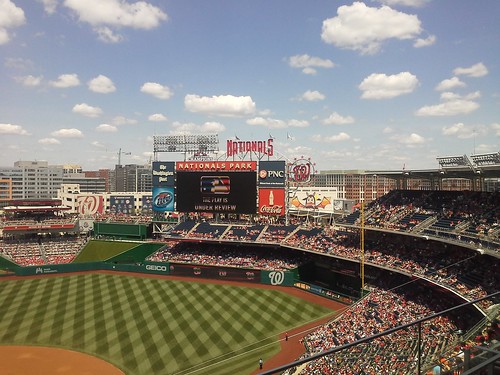 The windows-less building behind centerfield that was torn down had few months of glory, specifically, the mural of a bat. It’s going if not gone by now

sad, I loved that bat, it gave some character to the Nationals Park backdrop RT @JDLand: http://t.co/nJk6xSWAaO

The mural made the backdrop of Nationals Park much more interesting and let’s face it, a good backdrop is 50% of what makes a ballpark.

More later, maybe even a Nats vs. Pirates Q&A.