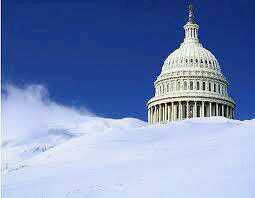 I surmised that she had just leaked that the NHL Winter Classic would be at Nationals Park:

The tweet was quickly deleted, but got several retweets, though none from some of the MSM folks that follow me.

A week later, it was finally made official that the 2015 Winter Classic between the hometown Capitals and the visiting Chicago Blackhawks (washingtoncaps.com) would take place at Nationals Park.

Nationals Park which is literally just 15 blocks from the U.S. Capitol was the obvious choice from the beginning. I criticized the NHL and the Caps/Ted Leonsis for not picking the venue outright. Baltimore venues were even under consideration which would have been completely unacceptable. They finally got it right, but it took much too long.

It isn’t unreasonable to suggest that the 2011 Winter Classic in Pittsburgh is the high-water mark of the Alex Ovechkin era. They beat the arch nemesis Penguins in the rain that night, but shortly thereafter, Bruce Boudreau was fired as coach. Though the reached the second round under both Dale Hunter and Adam Oates, it seems like the last time the Caps did well on a big stage. Last season, they didn’t even make the playoffs.

The choice of the Blackhawks seems like an effort to get President Obama to a game, but the Chicagoan goes to Hawaii for the holidays, doesn’t he?

The logo for the Caps appears to have leaked today (Russian Machine Never Breaks) and it’s a surprise. A fairly simple W and three stars; a fauxback seemingly to a time well before the Caps existed. It looks more like something out of the Washington Senators history than the Caps. We’ll find out on Tuesday with tomorrow’s event when the uniforms are unveiled.

This is the Caps 40th anniversary season which makes you feel old.