The Original: Ron Jon empire began at the Jersey Shore

SHIP BOTTOM, N.J. — When I was growing up, there was a certain cache in having a Ron Jon t-shirt. The Cocoa Beach, Fla. institution was advertised on countless billboards for hundreds of miles along Interstate 95 southbound, competing with South of the Border for road-weary eyeballs making the long southern trek. While the Cocoa Beach location (we made the detour circa the early 1990s) has long been “one of a kind” the beginnings was further north, at the Jersey Shore. Back then, I said this with pride, since I went to Long Beach Island nearly every summer until the mid-2000s (and now again in 2015). The claim was greeted with skepticism until I started showing up with Long Beach Island Ron Jon t-shirts and stickers.

Even just on Long Beach Island, Ron Jon has been through several incarnations. The latest and greatest is located just off of the Boulevard between 8th and 9th Streets (NJ 72) and a few blocks fro the Causeway. 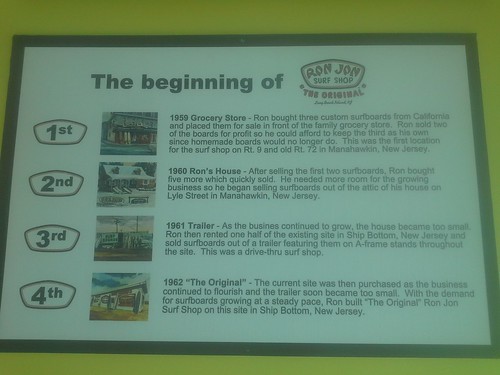 The story of Ron Jon is a long and strange one that the official version kind of glosses over.

He told how in 1963, wanderlust led him to place his father in charge of the New Jersey store while he set out in a camper, fetching up at Cocoa Beach, a place with sand the color of a faded catcher’s mitt that snared swell from several directions. He set up a small shop and with sensibilities shaped at his father’s supermarket, DiMenna worked hard selling the incipient surfing lifestyle.

“If you could get in his shop, you could be successful,” Boyd said. “In the early days, you needed to get in his shop. He was a major influence for Hang Ten. We got into Ron Jon’s shop and we exploded because of him.”

By the 1970s he had developed a dynamite fetish. He would send trees somersaulting 150 feet in the air from New Jersey’s pine barrens, once nearly impaling a low-flying plane. He smuggled sticks on a surf trip to the Bahamas in dog food containers and blasted a 100-foot geyser from a gin-clear cove, diving in and spearing hundreds of pounds of stunned fish.”It was very safe,” he said. “We had fun.”

I think Jon Bois needs to be lobbied to do a “Pretty Good” about Ron Jon.

Back at the Shore, the modern Ron Jon is mostly t-shirts and other touristy stuff. My oldest son and his cousins were treated to some t-shirts by my mother. Since I was cycling through when I stopped, I held off getting these knockoff, heavy duty solo cups, which would be perfect for gin and tonics. Now, I have incentive to return to LBI. 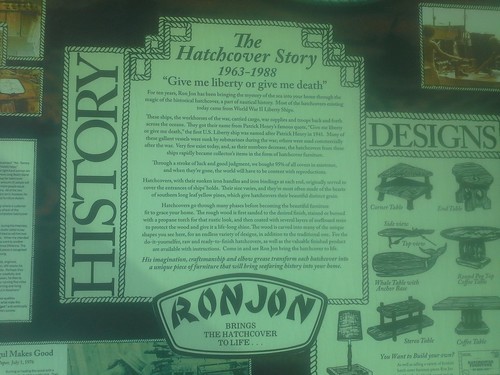 I also learned about hatchcover tables, which a friend of mine has — they were from ships, many of them sunk by U-boats.

You can decide for yourself whether making detour to see any of the Ron Jon shops is worthwhile, but at the very least read the story linked above — it’s an entertaining one.