Why is it called Doc Cramer Blvd?

MANAHAWKIN, N.J. — One of the first intersections on Route 72 east of the Garden State Parkway is for Doc Cramer Blvd. Over many years traveling to Long Beach Island, I had a mild curiosity of the boulevard’s namesake and during a trip to the Beach Haven Library I learned that Roger “Doc” Cramer was a baseball player from that borough.

Cramer was signed as a 23 year old by the Philadelphia Athletics in 1929. Society for American Baseball Research’s biography (which is posted in the library) explains it here:

Perkins had advance knowledge that a special young man named Cramer might help out the major-league club. It seems that some time earlier, Perkins and his teammate Jimmy Dykes had stopped by the office of a realtor named Van Dyke to look for some vacation property, and Van Dyke tipped them off to the local phenom. Doc did not disappoint, and at the end of the second game, Perkins approached the young prospect and asked, “How would you like to come to Philadelphia tomorrow morning and see Mr. Mack?”

Cramer shot back, “What time does Mr. Mack reach the park?”

“I’ll be there at 8:30,” Cramer promised, and the next day he arrived at Shibe Park to meet Connie Mack wearing a suit his brother Paul had bought him for the occasion. Doc’s father tried to persuade him not to go, but he did not listen and headed off for his tryout with his cousin Chris Sprague driving him there. Mack signed up the eager youngster and kept him on the Athletics bench for the rest of the season, then assigned him to the Martinsburg team in the Blue Ridge League.

Cramer played two games in 1929, which led to 30 in 1930 with about another 30 or so a season before becoming a starter at age 27 in 1933 after the A’s big selloff. Traded to the Boston Red Sox in 1936, Cramer patrolled Fenway Park’s centerfield for 5 seasons, earning All-Star recognition in his final four campaigns. 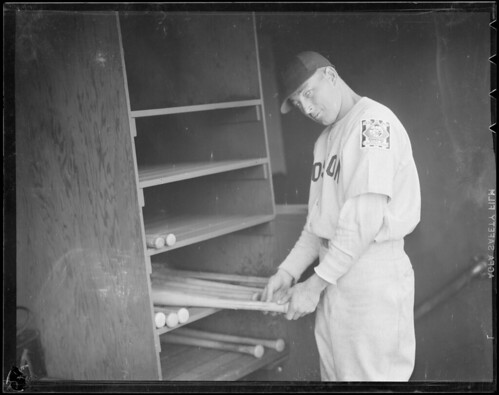 In 1941, at age 36, he led the American League in at bats for the sixth of seven times (he didn’t walk much) with the Washington Senators, though he only had a .317 OBP. An excerpt from D.C. Baseball History describes his brief Nats career:

After the 1940 season, Cramer would be traded to the Washington Senators for Gee Walker. In his only season in Washington, Cramer would play in all 154 games, batting .273 with 25 doubles, 6 triples and 2 home runs.

After the season he was traded again, this time to the Detroit Tigers, along with Jimmy Bloodworth, in exchange for Frank Croucher and Bruce Campbell. This would be Cramers last stop in his career. He’d play for the Tigers from 1942 through 1948, finally getting his release in May.

Cramer would retire to the mainland, across the bay from Long Beach Island, in Manahawkin. A baseball complex is named after him as well.