Last year, I learned that Jim Bouton starred in a television series based on his autobiography, Ball Four. The fictional team was the “Washington Americans” and the opening featured views of RFK Stadium.

I decided, granted only based on the opening credits, to take a look at the uniforms and logo.

The home uniforms are not far off of the classic “Dodgers look.” Red stars to dot the “i” too, like the 1960s Phillies uniforms. Not bad, certainly better than the set the San Diego Padres would have worn had they moved to D.C. in 1974.

That’s Oakland Raiders legend Ben Davidson, by the way, making his triumphant return to Washington. He played for the 1962-63 Redskins. 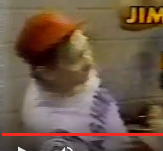 The road uniforms were similar to some jerseys (Dressed to the Nines) that the Senators wore over the year with WASHINGTON in block letters on the front. On the back, the name was in blue with the number in red, a look the Chicago Cubs have used (sportslogos.net).

The Americans logo, shown here is was on the sleeve. 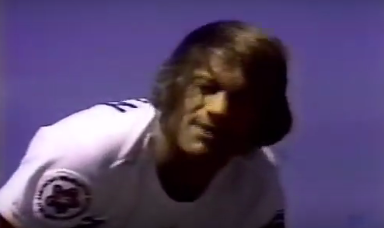 There is also a bicentennial logo (Wikipedia), probably best known in sports for appearing on the Super Bowl X jerseys and mentioned in UniWatch last month. 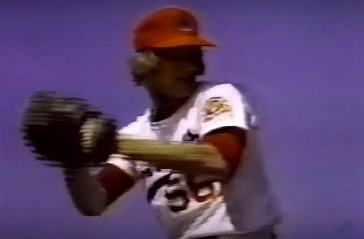 There’s Bouton wearing the red cap. It doesn’t come through clearly because sadly, screengrabs from 1970s television are less than high-definition. Was it an A or W? I can’t say.

Overall, it’s a decent uniform that I wouldn’t have minded being able to see in person growing up, but alas D.C. baseball was just a fantasy until 2005.

Here’s the opening, complete with Harry Chapin singing the theme.

It’s 51 days until the Home Opener, which should be on Opening Day