Do the Nats have a new BP cap? Also, a curly W comparison from Ball-Wonk

Nothing has been officially announced that I know of, so this may have been released by mistake; perhaps a New..Error?

It’s a good looking cap though, a nice fauxback that I’d consider buying for myself. I still wear the original navy cap I bought out of a trailer at RFK Stadium in late 2004. If there have to be separate BP caps, might as well respect historical versions. I previously advocated for the “White War” caps instead of the most recent BP cap, but I like these better.

This new cap is essentially the 1963-1967 expansion Senators cap, red piping and all, but with the modern version of one of our greatest consonants. The ’63 model was the first appearance of a curly W.

Tangentially related, there was subtle curly W update in 2010 that I only noticed when it was pointed out to me by the since transplanted former Nats blogger, who contributes this:

A couple of visual references.

Here’s the side by side comparison: 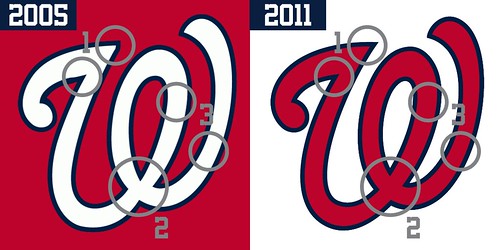 The 2005 Curly W recreated several flaws with the 1963-71 original, including most notably 1) The odd flat notch where the “bar” meets the left-hand curve of the W; 2) Misalignment where the W’s left and right curves cross to form the central loop; and 3) Randomly varied line thickness throughout the shape.

The 2011 revision corrected each of those flaws: 1) The “bar” now meets the W with a sharp angle and smooth curves; 2) The point were the two loops cross now aligns properly on all sides; 3) The whole W now has a much more uniform thickness.

Unfortunately, the Nats continue to use the 2005 original, with all of its flaws, on all uniform elements, including caps, home and alternate jerseys, and the road “Washington” script. The improved 2011 version of the Curly W seems to be reserved for advertising, digital media, ballpark signage, and non-uniform merchandise.

That’s the handiwork of Ball-Wonk blogger R. Scott Rogers, who currently supports the Nats from self-imposed exile in Wisconsin. Thank you, Scott, see you in the UniWatch comments.

Back to headwear, the proliferation of trilbys in MLB giveaways, including the Nats (Let Teddy Win), just shows that Manny Acta was a man ahead of his time (The Nats Enquirer).

Pitchers and catchers report in 6 days

Opening Day is 53 days away