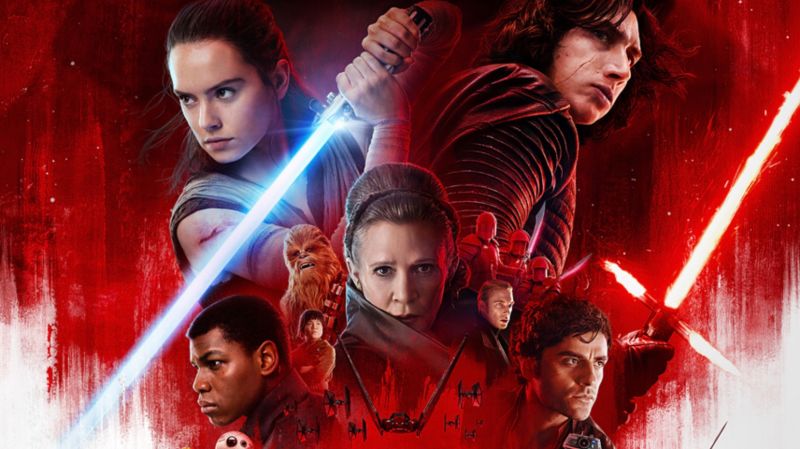 There were two “rules” I had in mind for Star Wars: The Last Jedi:

Though I avoided pre-movie hype as much as I could, ignoring the trailers specifically, the occasional clip or photo of was unavoidable. Little teases suggesting that the two rules were broken came through from time to time.

Anticipation was understandably high and I was fortunately able to see the movie the day after it was released. Taking place within a few days of The Force Awakens climax, the Resistance’s victory of the First Order is short-lived. Starkiller Base is gone, but good guys are fighting the bad guys again and after another Pyrrhic victory, there is a “intersteallar White Ford Bronco chase” between the First Order and what’s left of the resistance. It’s weird.

Writer/director Rian Johnson spells his name wrong pays homage to the movie serials that influence George Lucas with gimmicky non-death involving a primary character. We can only hope that Admiral Ackbar also had that ability and merely stowed aboard the ship off-camera.

Elsewhere in the galaxy, the gravitas of Rey’s journey to meet Luke Skywalker gives way to a gag. Funny, but as said later by the last Jedi, “a cheap joke.” Nonetheless, Mark Hamill plays the cynical and sarcastic Luke well.

There is also an alien milking scene because Rian Johnson is going to do this thing his way.

Overall though, the arc of Luke and Rey is strong. The force visions and conversations between Rey and Kylo Ren are interesting and create tension on the “will they or won’t they” that’s on my list of no-nos. The movie is at its best when Rey is on screen.

Leaving a reluctant Luke, Rey confronts Kylo Ren on his ship and is brought to Snoke, the modern Callou all grown up for Emperor Palpatine. The Supreme Leader finally gives a hint of being interesting but within a few minutes he was cut in half by Kylo Ren. The payoff is only immediate in that Rey is spared, but unlike the Emperor being killed by Vader, there isn’t much satisfaction as Snoke isn’t much of a character. Count Dooku of the prequels was more developed than Snoke. The Reylo team-up offers tension but is interrupted by a new character, Admiral Holdo (promoted during General Leia’s convalesce), ramming the doomed Resistance cruiser into the First Order flagship. Some back and forth between Holdo and Poe Dameron make her motives unclear up until her final deed, but she isn’t on screen enough to elicit much of a reaction. Admiral Ackbar could have done the same and that might have had more resonance.

Oh yeah, not having anything else to do, Finn and a maintenance worker, Rose, sneak out to Space Monaco to find a some sort of MacGuffin in the form of Benicio Del Toro to get aboard the First Order ship. All along their are incidents and accidents and more gags. It’s an elaborate set up for him having another confrontation with Capt. Phasma that is also coincidentally interrupted by Holdo’s taking the Nautilus down for the last time or whatever. That rivalry continues to be underwhelming.

Running out of options, the Resistance makes its last stand from a salt planet and goes on a strange speeder attack of the First Order. The timely arrival of the Millennium Falcon prompts Kylo Ren to put his personal vendetta above the First Order’s mission. Luke arrives too and buys the rebels enough time with sarcasm and previously unseen Force tricks. At least he got to hug Leia and wink at C3PO. Rey then uses basic Force practices to collect the survivors and and they live to fight on in Episode IX.

The Force Awakens and The Last Jedi offer contrasts between wit and gags. The former is better than that latter.

Rian Johnson is neither J.J. Abrams as a director or Lawrence Kasdan as a screenwriter. The former is returning in that role for IX, let’s hope the latter does too.

A world (galaxy?)-weary Luke is in contrast to character of the original series, but makes sense in the context of this trilogy. Rey redeeming, to some extent, his faith is predictable, but a natural arc.

Finn needs something meaningful to do instead of just being a reluctant hero good for laughs.

Maybe this will all make sense when IX is completed. The Empire Strikes Back may not have been your favorite Star Wars movie before you saw Return of the Jedi. It won’t probably won’t.

I hope that IX has a big time hop several years down the road. It was supposed to be the Leia movie, but that sadly, that’s impossible now. Perhaps the ending of TLJ could have been altered to accommodate it since all three principles from the original trilogy won’t be living for the final chapter. There is certainly room for one to return.

I barely noticed the soundtrack. The previous one was a slow burn with me, but I came around on the quieter Rey’s theme and “March of the Resistance.”

The Last Jedi is less than the sum of its parts and gets lumped in with episodes I and II on my list. I enjoy this and them, but there is a clear drop-off from IV, V (the best film of the series, period), III and VI.