MERCERSBURG, Pa. — A surprise opening of the family schedule led to a 10 a.m. decision to take in the first turns of the 2017-2018 Mid-Atlantic ski season. As is often the case, Whitetail ski area was selected as it gives a Washingtonian the biggest bang for the buck with location, operations and vertical drop.

The buck got stretched even more thanks to the Pennsylvania Ski Areas Association’s 4th & 5th Grade Snowpass Program, a $35 dollar purchase. It was my Christmas gift to my 9 year old and we eagerly tried it out. In addition to providing him with a lift ticket and equipment rental, his first trip including a lesson; the combination of all likely costing $100 or more typically. But wait, there’s more. I also got a discounted lesson, lift and rental package that came in at around $55. That and the lift ticket added up to about the cost of day of lift and rentals just for me. It’s a bargain.

After dropping off my son for his lesson, I hit the Lift Off Quad to get my skiing started. As can be expected on a holiday weekend, the line and ride to the top took some time. Stops were frequent, but I eventually got up to the mountain and headed down ●Snow Park. There was some ice which wasn’t surprising and it was crowded, but not a bad little cruiser. Next up came a trip down ●Sidewinder which had the best snow on the mountain. It’s a very comfortable green that lets you get some speed without stressing the legs.

Not wanting to spend too much time on the lift, I headed to the Whitetail Express Quad to the top of the mountain. I can’t remember the order, but I alternated between ■Snow Dancer and ■Limelight which were both fairly icy. Under a time crunch due to my son’s lesson (about 90 minutes), I hypothesized that the black diamond trails would have better snow and arrived at the Expert’s Choice Quad. I was mostly right, though ♦Exhibition had developed a fair number of moguls. ♦Far Side had fewer bumps and not too many skiers. On the third trip up the lift, my son called to let me know his lesson was over, so I headed back to the learning area via the delightful ■Ridge Runner down to ■Home Run which had the best snow of the blues.

After meeting up with my son, he took me up the magic carpet to show me what he had learned. It was his third trip overall, but the difference between March and today was striking. He had figured out balance and was confident, so after two trips up the Lift Off Quad and three trips down ●Northern Lights in total, I figured he was a ready for something longer and steeper.

We braved the long wait and ride up the Easy Rider Quad and plotted our descent. Recalling the favorable conditions of earlier in the day, we selected Sidewinder. My son was off, skis parallel and facing downward. He just kept going and going and then got his skis crossed a third of the way down and tumbled. Not a bad one and he was right back up. Then again, down the mountain, faster than perhaps this dad was comfortable with…

Turn to slow down!

Then I found myself realizing his was getting out of earshot and I needed to get moving.

Sure enough, he made it to the end of the run without incident and after that there was no other choice but to do it again. We did. This time, he made it down without incident or even stopping. It was beautiful and I was filled with pride. And cold. Very, very cold. The sun had set, the wind had picked up, but the day was won.

While lacking the touch-screen convenience of Blue Mountain, Whitetail nonetheless runs an sufficiently efficient operation. The front window staffer was helpful. They also use a cardboard ticket and ziptie, which while not the classic ticket wicket, isn’t like the soulless subway system cards that are coming into vogue elsewhere.

Inside the rental facility wasn’t cold and the staff worked at a good pace to get us our equipment. As for the equipment: 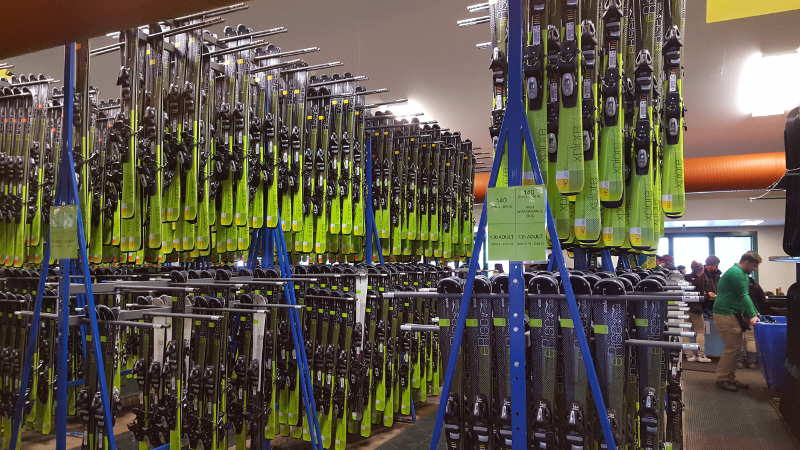 Nice, shiny new skis and boots. Sharp, well-waxed and the boots were the most comfortable rentals I have encountered. It’s hard to justify getting my own pair when rentals are that good.

We skipped the cafeteria this trip since we only had the afternoon. It’s still dry, I believe.

On the scale of green circle to black diamond, I give the day a ■■. Conditions were pretty good, I was very pleased with the lesson my son received, the equipment was excellent and Whitetail’s operations are better than most.