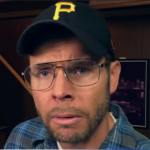 Sam (not pictured), The Maryland Bureau Chief Emeritus, and a Pittsburgh dad that isn’t “Pittsburgh Dad” joins us for another round of guest prognostication on the Washington Nationals and Pittsburgh Pirates series. By coincidence or MLB schedulers having a wicked sense of humor, the annual DC series is concurrent with the Capitals and Penguins playoff series. Sam’s Pens have a commanding 1-1 series lead over my Caps in the series after two games.

WFY: Cutch is gone. Gerrit Cole is gone. How are fans dealing with one of the city’s three franchises rebuilding instead of being a perennial contender like the other two? “Baseball nihilism” like one columnist suggested? They are having a good April though! What’s working so far?

TMBCE: Lets start out by saying this. The fans (to include me) are justifiably upset/angry/irritated with the Pirates (ownership in particular). All we hear from the Pirates ownership is that they can’t spend the same amount of money as say, the Yankees. Its non-sense. They refuse to spend any significant amount of money. But last year, there was a different change in tone because of the lack of attendance. I went to opening day, and It appeared to me that about at least 1/3 of the stands were empty. And its not just that they traded Cole and Cutch, but they got no significant returns. I am pleasantly surprised with the early start, lets be clear. Fans are not expecting a playoff appearance, and it will be an accomplishment if they finish above .500.

WFY: What was the highlight/high water mark of the Cutch era?

TMBCE: By far, its the 2013 season. His best season statistically was 2012; but the fans remember 2013 the most. He led the team to break the 20 year losing streak AND took them to the playoffs! The fun continued into 2014 and 2015, even as his skills starting to slightly decline (mostly in the field). He was a team leader and he wanted to stay here. The fans are disappointed.

WFY: Ownership really blew their chance, didn’t they? The Pirates weren’t going to be a dynasty, but they had a few years where they could have played for the breaks and maybe gotten a flag.

TMBCE: Lets be clear–the Pirates ownership blew this BECAUSE THEY DIDN”T WANT TO INVEST INTO THE TEAM! They won 98 games in 2015, which was also a playoff season. Ownership chose to spend less, not more.

WFY: Jung Ho Kang is coming back though? That’s not awkward at all, for Pirates fans. is it?

TMBCE: Its very strange for me. Two years ago, I got a Kang jersey for my birthday. I was SO excited about it, because I’d never gotten a Pirates jersey before. I was pumped! Shortly after that, his legal issues began to become public. I have NOT used it yet. I still have the tag on it; I may not wear it ever.

WFY: No weekend series this year, so there won’t be scores of Washingtonians making the trip, including me. Has there been any observation that Nats fans travel well for this series? My small-sample size suggests we do. I hope it’s a weekend series next year so I can make the trip.

TMBCE: I think I’ve said this before, but I’ll repeat–the Pirates should be in the same division as the Nats. The Pirates should have increased rivalries with Washington, Philly and the Mets. That’s the way it was when I grew up (Nats used to be Montreal of course), but those were rivalries of my youth. I think many people think so. I can’t find the same energy for a rivalry with Milwaukee. But my friend Andrew Manion is a member of the group that thinks I’m wrong. Yes, the Pens-Caps is a great rivalry, but I think the Pirates – Nats can get there someday.

WFY: Are you filled with pride that Western Pennsylvania dirt (Post-Gazette) is used for over 70% of MLB basepaths?

TMBCE: Of course I do! And not even just because of the Pittsburgh reasons, but you may recall that I have got a minor in Environmental Engineering from our alma mater. Most of my career has been using those environmental skills, so it does bring some personal pride.

WFY: Last summer you and the other Sams went on a ballpark tour. How would you rank Nationals Park with all the stadiums you visited in 2017? What about your dad and son, did they reach the same conclusions?

TMBCE: It was a terrific experience! Nats Park has some similarity with PNC Park (view of the city adds to the great experience). I thought the Nats food was satisfactory, and that didn’t even include a half-smoke. As you may recall, the Nats hit FIVE (I think) homeruns consecutively that day! Based on my 4 baseball stadium visits last year, I rank them: Yankees Stadium, Nats Park, Philly Stadium, Mets Stadium, Blue Jays Stadium. My Dad and son agreed with #1, 4,and 5 but had the Phillies Stadium as #2.

WFY: Is Pittsburgh Dad is more familiar than funny? Does he even acknowledge the Pirates much? A brief search suggests “not really” but he seemed broken up about Cutch leaving. Does he even live in Pittsburgh or is he from Uniontown or someplace pretty far away?

TMBCE: Honestly, I’m not even sure. Some of his videos are funny, but I’m not the biggest fan, as some of my friends and neighbors are. I don’t follow it that closely.

WFY: Back to real life, I saw that you ran in the Pirates Charities 5K; why don’t you tell us all about that? Of course, what about Brain Cancer Awareness 5K?

TMBCE: Thank you for asking! Excellent timing too, since May is Brain Cancer Awareness Month. I am honored to be part of a team that is raising awareness, support and funding to increase research and to find a cure for brain cancer. Our team is already underway in planning for the event again in August (8/18). Nicole and I are specifically managing a survivor tent for those who are affected by brain cancer. 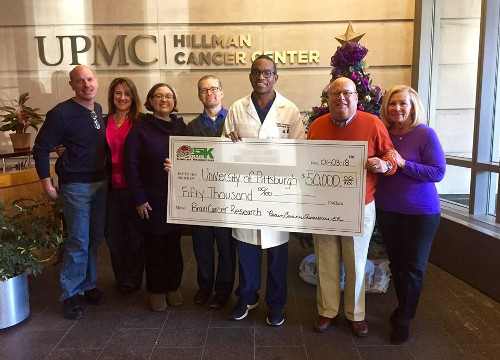 Our team generated $50,000 and all funding is donated to the University of Pittsburgh Medical Center (UMPC). The money goes to my doctor specifically, who removed my tumor. Its one of the most important things I am doing in my life. I will have more to say in a few weeks, but if you and Erica are available for a weekend in August, feel free to come!

WFY: Let’s end on this – how is this Nats-Buccos season series going to go? How do you feel about our earlier conversation on the Caps and Pens? (This will be included in the post). I don’t see a scenario where the numbed-Caps fanbase is not dealing with the Western Pennsylvania diaspora celebrating on the National Portrait gallery steps.

TMBCE: I will predict the Nats to win the season series 4-3. (Nats will win 3 of 4 in Washington, but the Buccos will bounce back with a 2 of 3 winning series in Pittsburgh). Although I will always mention that Sammy (now 12 years old!) is playing the National Anthem at PNC Park on June 6th with his middle school band! Pretty cool. As far as hockey, I really feel that the Caps are going to win the series.

Caps in 7 games. In part, the Penguins defense has been WAY too inconsistent. Also, Evegeni Malkin and Carl Hagelin are injured–that hurts the Pens tremendously.