The preamble I had been working on is obsolete. It snowed on Thursday, November 15. Almost 4 inches in the front yard in Alexandria’s West End. Winter isn’t coming, winter’s already here. To that, I say:

Don’t hate winter, use it!

First, I previewed broomball in the D.C. area, now let’s talk about skiing…

Snow started falling in the Alleghenies by October 13.

It’s our closing weekend for summer operations. Looks like Mother Nature is on the same page with us…
?❄ #snowshoemtn #almostheaven #wvsnow pic.twitter.com/LWIibuKptK

Snow has even accumulated at few places in the western extremes of day-trip distance on the October 21. The snow guns were roaring on November 10 in several places, even in the Commonwealth of Virginia. Thanksgiving openings are possible. Big Boulder in the Poconos will be open this weekend. Ski season is starting!

Prepare yourself mentally and physically, the consensus in the meteorology community that this is going to be a snowy winter.

❄ D.C. winter outlook 2018-2019: We predict snowier than normal conditions for the first time in three years

Capital Weather Gang will also be providing a skier report each Friday:

NEW: Our first Mid-Atlantic ski report of the 2018-19 season… Please share with your ski enthusiast friends. We plan to post these every Friday. https://t.co/bp80UpYyL2

❄ WHAT THE EXPERTS THINK
Five meteorologists from New Jersey, Pennsylvania, West Virginia and North Carolina think it’s going to be a good one for Mid-Atlantic skiers.

Snowtime sells out to Peak

On September 24, 2018, it was announced that Snow Time, Inc. was being purchased by Peak Resorts. Snow Time was the parent company that operated Pennsylvania resorts Liberty, Roundtop, and Whitetail — each within a 90-minute or so drive of Washington, DC. The sale of Snow Time to Missouri-based Peak Resorts marks the end of an era for the Mid-Atlantic ski scene.

The history of Snowtime and its founder, Irv Naylor, is an interesting one that I was unfamiliar with until this great article.

MORE: Whitetail, Roundtop & Liberty resorts to be sold for $76 million – Public Opinion (Chambersburg, Pa.) I launched their first web site way back when.

What does it mean for DC area commuter skiers? Probably not much yet, but the Peak Pass might make that trip to Hunter Mountain and its 1500 feet of vertical drop seem more inviting. What happens in the 2019-2020 season will be interesting. Whitetail has been very well-run under snow time and my hope is that will not change.

Other skiing news and openings

The second weekend of December is opening weekend for most Virginia ski areas.

Proximity, volume and friends lead me to Pennsylvania for most of my skiing. The Pennsylvania Ski Areas Association (SkiPa) has a press release on what’s new for the season: What’s New at Pennsylvania’s Ski Resorts for the 2018/2019 Season

From the Morning Call (Allentown): Lehigh Valley area ski resorts get a jump on the season for Black Friday

From the Post-Gazette: Your guide to southwestern Pennsylvania ski resorts | Unpredictable snowfall? No problem as ski areas install state-of-the art snowmaking this season

Do you have a 4th or 5th grader? They can ski cheap at participating ski areas with the SkiPa Snow Pass.

I signed my oldest kid up for it last year and it worked out very well for us – $40 for the pass which meant free lift tickets at participating resorts. The first time we went, I got a break on rentals and lift ticket as well and we spent a $55 out of pocket that day.

I wish other states (or commonwealths) had this as well. Maybe start with 5th and 6th graders next year, Virginia?

There is also a first-time skier package as well.

Are you doing your exercises?

I’m an evangelist for daily wall-sits leading up to ski season. Earlier in the decade, I’d do them around 2 o’clock every day at work; co-workers even joined in. It makes a huge difference, even just a week ahead of time. More than and you really see how much easier and better the skiing winds up being. SkiDome has more on getting in skiing shape.

Don’t be that guy

Last year’s Camelback trip was a friend’s first in a decade. He used his old skis. Before we even got out of rentals, he was having some remorse about the decision. 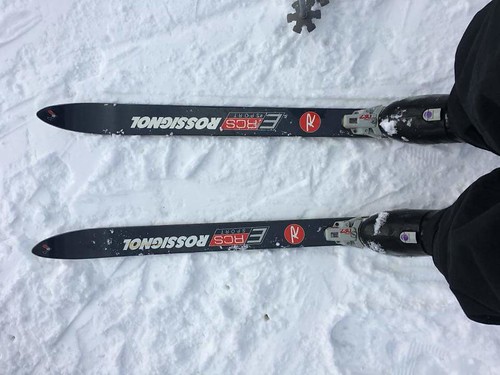 Spend the $30 and have a better, easier day.

Also, don’t be the guy that leaves his phone on his friend’s kitchen counter when you head to the slopes.

While I encourage you to read all of my recaps of skiing in the Mid-Atlantic, I have broken it down into easier to skim format:

In the distant past, I took trips to Liberty, Roundtop, Wisp, Montage Mountain and Eldora (Colorado).

Oh near-ish mountains I have yet to visit, Wintergreen is near the top of my list. Seven Springs gets praise for its apres ski, but I’m not sure 750 vertical is worth the trip when Blue Knob is closer. Since I tend to ski with Pennsylvania-based friends, Montage and Elk mountains off of I-81 look like a tempting alternative to Camelback but they are probably overnighters, as is Snowshoe. A friend, since departed for Costa Rica, used to say he wouldn’t ski south of Hunter Mountain, that’s intrigued me.

Several sites provide important coverage of our region’s ski areas. They are great for finding special deals, getting insight on what ski areas are really like, conditions and the community of Mid-Atlantic skiing.

The long-time go-to for Washingtonians interested in snow sports has been dcski.com, run by M. Scott Smith (interview from 7-ish years ago). He has in-depth resort profiles as well as a facebook page & forums.

Skidome.org focuses on the southern Pennsylvania resorts closest to D.C. and has discounts for regular skiers. The site is quite extensive and it turns out, one of my co-workers (now in Utah) was a founder.

According to some (like the NBA; the NHL realized the folly & realigned divisions), DC, Virginia & Maryland are the Southeast. I suppose the case for most of the Old Dominion is fairly strong, but semantics aside, SkiSoutheast has profiles & news of Virginia, Maryland, West By God Virginia & more southern resorts. It’s enthusiastically updated often, a must-read if you want to go to a WV resort or further south. They are looking for people to join their team too.

LiftTicketTV gives a family perspective on skiing, mostly in Pennsylvania, but sometimes further out. They are most active on youtube, but also twitter.

Pronounced “shee-ing,” skiing is fast becoming the most popular of all winter sports. And small wonder, for there is no finer conquest than that of a mountain clad in its glorious winter mantle of glittering white.

Sadly, The Art of Skiing featuring Goofy isn’t embeddable in a good format now, so you have to go here and settle for shaky cam.