In addition to generally tasting better and supporting the local economy, craft beer has stories with it and maybe even some whimsy. One of my favorite styles, Vienna Lager, is now being canned by two Washington, D.C. area breweries including the one in the town I grew up in.

For several years now, Caboose has served as gateway to the Town of Vienna for bicyclists and pedestrians on the eastbound Washington & Old Dominion Trail; I stopped by in 2016. They just announced on January 2 that they would begin canning for the first time. Appropriately, they start with their Vienna VA Lager (nee Crossroads) which I can’t help but appreciate. Puns, hometown callouts and a design evocative the W&OD scenery is just blatant WFY fan-service.

Mark your calendars for January 3rd. Something very big and exciting is happening at Caboose… Any guesses?

If the label was blank except for the power lines art, it’d remind me of the W&OD.

There is symbolism in the colors though and unfortunately it isn’t whimsical; quite somber in fact:

Our very first brewer, Chris Mallon created our Vienna, VA Lager…we will always remember Chris, and be thankful for having him in our lives. We chose the colors purple and turquoise on our label in his honor, to promote suicide prevention awareness.

A fellow Vienna native, someone that I rode bikes along the W&OD past present day Caboose, joined me in his approval of namesake beer. It’s a bit sweet, the color is maybe a little milder than you’d expect and the finish is smooth.

I watched the Bond movies a lot growing in Vienna. To a fault.

Alas, inquiries about the name have not yet been returned.

As for the beer, it’s smooth, not too sweet and it comes in 4-pack tallboys. I pick it up when I’m at Ace Beverage on New Mexico Ave. NW. I hope it becomes a regular part of the 3 Stars lineup. 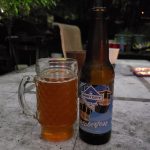 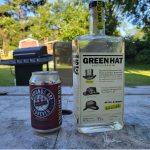 July 12, 2022 No Comments on Pour one out for DC’s 3 Stars Brewing and Green Hat distilling
​On Friday, July 7, 3 Stars Brewing announced they were closing on Sunday, July 9 after a decade of production​​n Brewing. Based in Northeast D.C.…
Read more 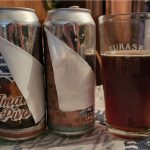 Peel off those beer can stickers and labels before recycling

January 14, 2022 1 Comment on Peel off those beer can stickers and labels before recycling
Chances are you local craft brewer has pivoted to aluminum cans in its packing. In my research on the Pepsi with Real Sugar shortage, I…
Read more
Page: 1 2 … 14 Next »