MERCERSBURG, Pa. — The rainiest year on record has not seemed to end, even as the calendar changed from 2018 to 2019. At last, the final weekend of January offered dry skies and reasonable tempratures.

In short, Whitetail was packed.

My son’s final Pennsylvania 4th and 5th Grade Snowpass was finally put to use, a month and a day after he received it. We arrived late in the morning and endured a longer wait to get equipment. 25 minutes? Not terrible given the volume and the time to fill out the forms. One of these years I’ll remember to grab a few on the way out and pre-fill them.

A lesson was in order for my son, so I dropped him and head off on my own. I started my day with ride Easy Rider Quad lift to the ●Sidewinder. As is typical for Whitetail, Sidewinder was crowded but manageable and the conditions were good.

Thinking I had only 90 minutes to ski on my own and expecting a lot of time on Sidewinder later, I headed up Whitetail Express Quad to the top of the mountain and went down■Limelight. The snow was okay, icy in a parts, so more than a few edges had to be blown through. ■Snow Dancer seemed to have the best snow of the blues.

Heading up Whitetail Express Quad again, I was seated with a ski patroler who called a “hero snow” day. Perhaps, if grading on a curve, but it was just a little bit left on top of the hard pack. Rain two days earlier challenged the Whitetail snowmmakers and they did well with the time they had. He also talked up joining the ski patrol and he sold it well – maybe someday.

A run down ■Angel Drop and ♦Drop In put me in the black diamonds and there I found better snow than the blue squares, a fairly typical mid-season occurrence. A took a few laps on ♦Exhibition and ♦Far Side via the Experts Choice lift. Not wanting to leave my son stranded after his lesson, I made my way back to the center of the mountain on the gentle cruiser ■Ridge Runner, followed by ♦Jib Junction; i avoided the features though.

The rest of day was spent on Sidewinder. It’s such a great slope because it’s fairly long, has some curves and is enjoyable for different skill levels. The lights came on, but the slopes remained busy..

When it comes down to it, it was a pretty typical Whitetail day. The east-facing slopes hold up better than one would expect, the views a pleasant. The sun came out and it was as good a middle of the day you could hope for weatherwise in January. Just a little above freezing with light winds for the heart of the day. My son improved and we both enjoyed our trip. We just may get out there again, though maybe a bit earlier arrival.

Whitetail is located just across the Mason Dixon Line in Mercersburg, Pa. It’s about an hour and half from the Capital Beltway. 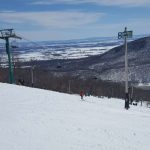 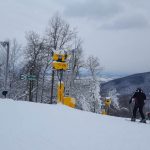 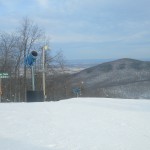