Many years ago, compiling lists of state highway routes was what the cool kids highway enthusiasts road scholars road geeks were doing. They weren’t too sophisticated for the most part, although there were standouts like kurumi.com which is still gettin’ it done. As a joke, I contributed by going with the District of Columbia and it’s one “state” highway, DC 295.

DC 295 is a continuation of Interstate 295 along Kenilworth Ave. between the 11th Street Bridge (now posted as I-695) and the D.C./Maryland border. Once it Maryland, it briefly becomes MD 201 until that exits the highway before the Baltimore/Washington Parkway merge. North of MD 175 in Howard County, MD 295 begins.

Whether by deliberate policy or benign neglect, numbered highways are not well-posted through the District of Columbia. Relying on posted signs to travel along anything other than I-395 is probably going to be confusing. Even I-295 is poorly signed. The US routes, 1, 29 and even 50 are sporadically posted.

In a more perfect world, DC would better mark the numbered highways, through routes, through the city. They’d also increase the numbered routes based on the numbered state routes that enter the District. Here’s a list I’d like to see:

4 For PA Ave east of the Capitol, it would be an extension of MD 4.

At one time, there was a posted route 4 (and 5 apparently) with a US style shield:
Steve Anderson writes:
>From Robert Droz’s posting in misc.transport.road:

On a related note, I found another reference to
DC 4&5. It is in “Color Guidebook to Washington” The cover is marked
July 5, 1957. It is on Pennsylvania SE of the US Capitol. The centerfold
map also shows US 211 with US 29 on M St. 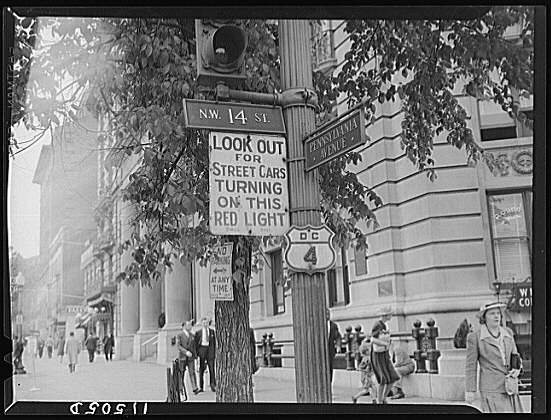 97 Georgia Ave, Making 97 enter DC-MD-PA. Would have to change US 29 to 16th Street again or multiplexed.

123 This is the best candidate from VA, just about the only one really. Would enter from Chain Br. and then follow Canal Road to M Street. Then it could be signed along PA Ave to K Street and end at US 29.

390 16th Street from MD to K Street just north of the White House.

450 Instead of US 1 ALT for Bladensburg Rd. This of course would be coming from MD.

Will any of this happen? Probably not.